We enabled a large North American carrier to be profitable on a new route it launched on a highly competitive Asian sector in its first year.

Ian the GM for a well know North American carrier based out of a large Asian city was given the task of launching a new route on a highly competitive sector to the country where he was stationed. This carrier already had one other route there which was doing reasonably well but this new route was going to have to compete with some other incumbents which had good connections into all of North America. The target for that route to turn profitable was in the third year which is usually the norm on competitive long haul routes. Due to extreme cost pressures, Ian was given the task of generating profit on the route by the end of the second year.

Ian had introduced Airline Metrics as its sales and marketing analytics solution a year ago so it was perfect timing to focus on the new route promotion using this tool. The first flight was around 12 months away which gave Ian enough time to meticulously prepare the marketing strategy and campaigns around it. Not being the incumbent home carrier meant having to rely extensively on the indirect agency channel to a larger extent than the direct website sales. But regardless of which channel he used, Ian could clearly see the forward sales for the flight as soon as tickets were issued updated daily in the Flight Dashboard module. Airline Metrics not only showed the revenue being generated on that flight per month in the coming months but also showed which cabins and RBDs were being sold the most by which agent and from direct sales via the web. This enabled Ian and his sales and account management teams to continuously calibrate the fares and incentives offered towards achieving not just higher revenue but also higher yields. 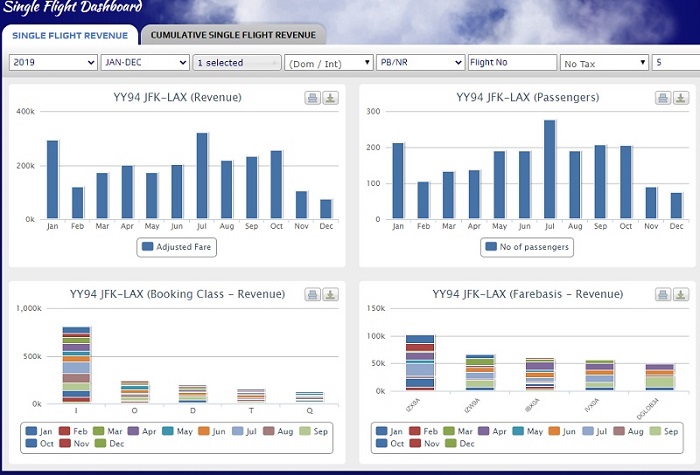 The approach taken by Ian was so successful that the flight was profitable within the first year which was till then not deemed possible. By using analytics from Airline Metrics to constantly measure the success or lack of all their marketing and sales initiatives, Ian could readjust these campaigns on an ongoing basis. The clear information showcased using dashboards, graphs and reports including the ability to drill down to ticket and coupon level, empowered the team to generate an enormously successful launch of this new route.