Using the tax breakup feature improved the accuracy of reporting and productivity of the BI team for one of our travel agency customers.

Allan was the Head of Business Intelligence for a travel agency group with operations in multiple countries. The company had invested heavily in a variety of BI tools like Tableau and Power BI but Allan noticed that his team was still struggling to generate the right reports for the C level management and air supplier management teams. One of the challenges they kept facing was that in some markets some of their airline partners measured their revenue by excluding all taxes and surcharges while others included surcharges like YQ and YR. This created a whole lot of problems for the analyst team because they had to keep track manually of which airlines in which countries included or excluded which tax codes and had to continuously adjust the reports on an ongoing basis. Sometimes the team forgot to do so which resulted in incorrect numbers showing up on the reports and the management teams then having issues reconciling the reported revenue from carriers.

Allan after conducting a thorough market evaluation settled on Airline Metrics. Using Airline Metrics, all reports whether they were ticketed or flown or destination based could all be customised by each user by just a click of a button. The best part was that the BI team did not need to do anything at all for this to happen. The tax breakdown option was available across all dashboards, graphs and reports within Airline Metrics. In addition, the ability to load these conditions onto airline targets using the Contract Module meant the accuracy level of the flown revenue estimates ended up in the high 97% plus percentile level for most of the major carriers with some being around 99.4% which was an astounding result for the team. This meant managing targets on a proactive basis with the relative security of the system being pre-set to include or exclude YQ or YR tax elements or other such tax codes if applicable. 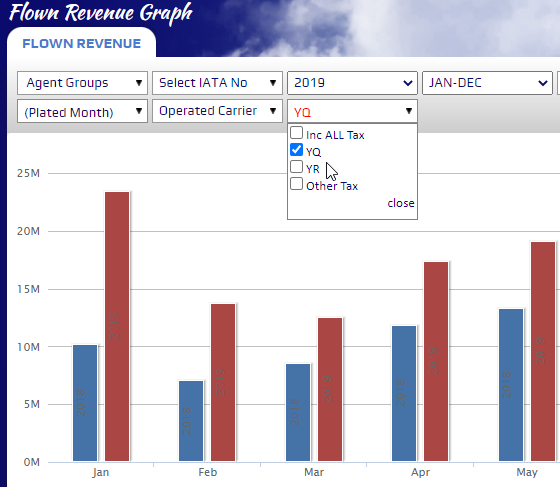 There were huge benefits all around the business. Firstly, the BI team were able to save hours and hours of work each week by not needing to keep running and adjusting reports. Secondly, the management team were able to generate most of the air reports themselves without needing a huge amount of support from the BI team which freed the BI team to work on other priority projects. Another benefit for the supplier management team was that they could “set and forget” the targets with the different tax inclusions and exclusions and each week the estimates were updated accordingly. One unexpected benefit was for the accounts and refund management teams. They were able to tap into the Transaction module which helped them pull out detailed ticket wise and coupon wise information including ticket images that provided quick and easy reference and saved a lot of valuable time of looking up details via BSP Link and other data sources. With the system being cloud based it was a huge asset to the team when the pandemic set in to allow them to continue working from home without any disruptions especially when the refunds had to be processed and tracked.