We empowered a small OTA to win a highly lucrative incentive contract with an airline which had a net zero commission policy for OTAs!

James the CEO of a small OTA was battling a couple of critical challenges. The first was the competition they faced from the larger OTAs in the market as they were one of the smallest and the second big problem was many airlines had a stated policy of not having any agreements with OTAs as they considered them a competitor to their direct online channel business. So how then to increase the income from air sales in this tough environment?

James and Phil his Airline analyst decided to play the long game. They started targeting this one particular airline that had, in their opinion, the ability to provide them with an excellent incentive deals on their long-haul sectors if they could secure an agreement with them. This middle eastern carrier was renowned however for not dealing with any OTA but having very competitive deals through other travel agency operators. Repeated overtures to the country manager of that carrier went unheeded.
As a first step they decided to slowly start increasing sales on this carrier via their website despite not getting any increased commissions. But what they did start to do was to create a monthly “management” report using Airline Metrics’ Snapshot Analytics module that created an in-depth reporting pack on that airline within seconds. The reporting pack covered Ticketed Sales at a revenue and passenger level, projected flown revenue graphs and reports, RBD and Cabin sales as well as Origin and Destination sales information. Phil would then email the pack at the start of each month to the airline’s management team. 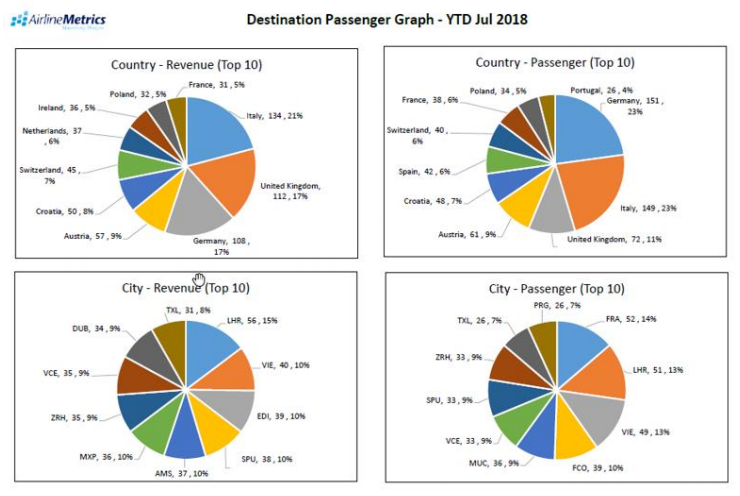 Slowly but surely the sales for that airline started climbing over the next three to six months and was clearly visible across all parameters in the reporting pack. At the six month mark, James sent another email for a meeting and enquiring about a meeting for an agreement. The airline did not respond. At the end of the 7th month James sent the pack to the airline management stating in his email that he hoped that the airline could see the value their business was delivering to the carrier and that they had delivered a near 100% increase in their business over the past six months. He also added that unfortunately since the airline did not see the value of their business they would no longer be selling that carrier on their site. The same day Phil delisted that carrier on their site. But what they did do was then continue sending the pack each week showing zero or negligible sales for that carrier. Within 15 days the carrier reached out to James saying they appreciated their business and would he like to meet with them to discuss a new agreement?
By patiently proving to the airline that the OTA could channel business to that carrier, James was successful in generating income from an airline with a stated zero commission policy for OTAs.