Airline Metrics enabled one of our large customers to identify an additional USD 600,000 to USD 1,500,000 in income opportunities.

Mark the CEO of a very large consolidation business in North America was quite pleased with their sales performance for the previous year. They had achieved record sales and were on track to surpass their best-ever performance. His ambitions were to not just manage airline targets but to also maximise profits. One issue that was always nagging him was that there might be some money they have left on the table with airlines since they were ticketing on many carriers and not just the major ones. The challenge was he could not exactly quantify exactly how much that was, where the opportunities lay and what baseline to use to begin negotiations with airlines after identifying such opportunities.

Mark at this stage introduced the Airline Metrics solution within the organisation. Having processed two years of historical data it only took about three or four weeks to go live. The team was trained up using training videos and live product training over the following weeks.

Within six weeks of signing the contract with Airline Metrics, Mark and his team started analysing the revenue numbers using the comprehensive suite of dashboards, reports and graphs that are ready to use within the application.

One such report they focused on was the flown revenue report. It provided them with flown revenue projections for each airline with the ability to break it down by various filters including ticketed, marketed and operated carrier details. Monthly revenue numbers with an Export to Excel feature built in meant they could start looking at the opportunities they had in mind when they brought in Airline Metrics. 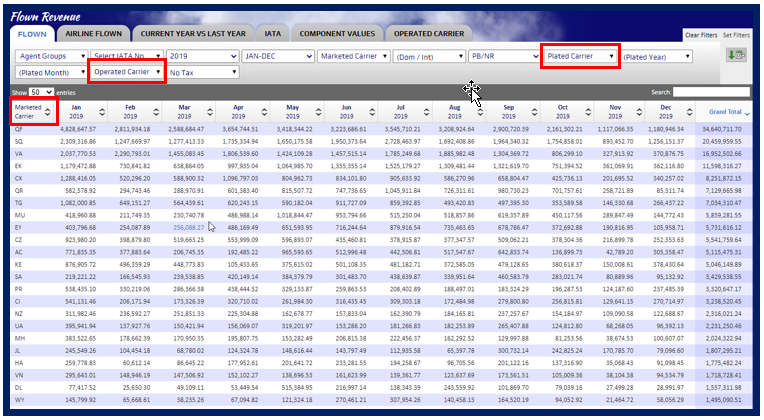 The resulting opportunities were a shock to the team. They realised they have a potential annual income opportunity of between USD 600,000 to USD 1,500,000 on uncontracted carriers. They had no idea that they had been leaving that much on the table for so many years when all they needed to do was to approach the airlines with proof of their turnover and start negotiating incentive deals. A lot of this was not picked up by their accounting system because of the number of airlines alliance deals. Long haul passengers were ticketed on local carriers but the international sectors were operated and flown by partner carriers. Or they were issuing tickets on so many airlines that in terms of percentage of overall revenue they were much smaller than the major carriers and were not showing up on their management reports regularly. Adding all these opportunities up brought in a huge income source on existing sales without having to spend any extra money on sales or marketing. The ROI on their Airline Metrics investment was achieved just within the first few weeks.