Tactical Use of Airline Capacity Changes

Tactical Use of Airline Capacity Changes

Airline Metrics enabled one of our consolidator clients to garner a 15% margin on tactical flight sales.

A very large Asian carrier pre-pandemic introduced an extra frequency into one of the gateway cities in Australia. They announced plans to fly in with a very large widebody which everyone in the industry knew was an overkill for the market. It was obvious to Jack Reed (name changed for privacy reasons) the Air Contract Manager of a large airline consolidator that this carrier was going to struggle filling this flight. The airline would not accept any feedback from the agency community and started promoting this flight heavily.

The problem now was this was going to lower the yields for that sector because of overcapacity and create problems in achieving the flown revenue targets in $ terms for that airline and others as competition meant cheaper fares.

Jack started tracking their sales activity for this particular flight using Airline Metrics’ Flight Number analytics reports as soon as bookings for it opened up in the GDS.
By looking at it each week he could start to see that the airline was getting some traction due to marketing activity for the early months of that flight but was really struggling to find the volumes needed to keep it profitable as the weeks went on for the following months.
Jack came up with a tactical strategy and decided to wait and watch a further 6 months. At the end of the 6 months it was clear that the airline was desperate to do whatever it takes to sell those seats. This is when he invited the sales manager for the airline for a lunch meeting and pitched to him that he can sell an extra volume of seats each month through his consolidation distribution network on that flight if he could get a special net fare. Jack promised weekly reports using their in-house tool (Airline Metrics of course) that showed how much they were selling for that flight. How could the airline sales manager refuse? 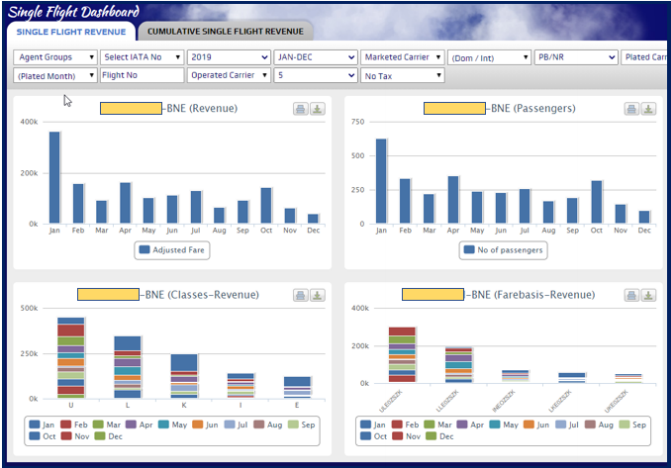 Every ticket that Jack sold via his distribution channel netted him 15% for that flight. This was unheard of even when standard commission rates were the norm before the turn of the century. Incredibly this went on for another three months generating profits that far surpassed the lower yields from the incentive contracts as they could not make top tier revenue wise even though there were more passenger numbers for that airline. Eventually the airline had to withdraw the new service but Jack managed to convert the disadvantage of lower yields to a huge advantage and position their business as a true partner to the carrier.