Transform the Air Division into a Profit Centre

Transform the Air Division into a Profit Centre

We helped boost margins on air sales by 5% and increased air revenue by 15%-20% year on year for one of our European Tour Operator customers.

Jasper the newly appointed CCO of a Tour Operator in Europe noticed that the business was issuing air tickets annually of around EUR 25 million. However, some tickets were being issued on their IATA number for just standard or zero commissions, others were being bought at retail prices from airline and OTA websites and yet others were sourced from consolidators with very low margin returns. To add to these problems, it was very hard to get an idea on what O&D destinations were being sold, how much in advance were these tickets being issued, what RBDs and cabins were in demand and what the process was for absorbing a flight ticket cost within a tour booking. In addition, he found that there were no set agreements with most airline suppliers or consolidators and no defined policy on how to manage airline deals and generate increased margins from them.

Jasper appointed Melanie as the Airline Supplier Relationship manager to manage all airline related issue and brought air ticketing and all revenue and income streams from air sales under this new department. He also mandated that the air division should be a profit centre instead of a cost centre. Melanie firstly got her team to streamline all ticketing on their own IATA number. She had also used the Airline Metrics solution in her previous role with a global travel group so she got Jasper to approve rolling out the system to her analyst team.
With ongoing clear information on revenue and volumes across various airlines and O&Ds she then started reaching out to her airline partners and sending them information on their performance with a request for incentive agreements. She was successful in reaching agreements with ten major carriers within six months. This enabled her to roll out a ticketing policy of preferencing these ten carriers for ticket issues. She also added two other consolidator agreements which meant any of the airlines who they did not have an agreement with were ticketed via either one of the two consolidators. 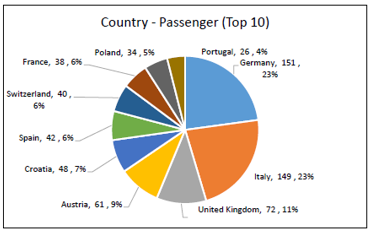 Melanie completely changed the dynamics of the air division within the business. The first goal of changing the air division into a profit centre was achieve within six months as the streamlining of agreements and consolidation of ticketing and analytics started bringing in between 3% to 5% in margins on air sales. The next big benefit was the ability to get airlines to support marketing programs especially as they fit in perfectly wit their “Early Bird” sales rollout where bookings were made several months in advance. Airlines loved the fact that they could sell higher yielding business class segments to their customers well in advance securing higher returns and customers were happy to access discounted flights as part of their tour package. This also brought in very high levels of back-end incentive commissions to the business. This strategy boosted not just income from air sales but also started growing them by about 15% to 20% each year as they were able to leverage their distribution channels.