Ruth a travel manager for a large company was confounded regularly by a problem that put her on the backfoot while negotiating airline agreements especially on international routes. She used to receive reports from her travel agency, finance department and expense management system with regards to spend by airline per month. Whilst there were variations in all these reports she could still account for those with some adjustments. However, none of these reports matched with the numbers provided to her by carriers especially related to international travel agreements. Repeated clarifications asked of carriers were not answered to her satisfaction as the account managers kept saying these numbers were from their head office revenue accounting system and were the only ones that would be used for measuring her company’s spend as they were based on “flown revenue”. With such significant variances, her projections never matched the budget and often she fell short of spend agreements with carriers resulting in loss of incentives or reduction of benefits. This was made worse with the pandemic and while travel soared post pandemic there was no baseline to use for measurement of “flown revenue”.

Ruth subscribed to Airline Metrics’ solution that provided her with comprehensive information on all elements of airline revenue including “flown revenue” projections. These projections came in very close to the airline numbers and the best part was she was able to access these numbers well ahead of when the airlines would report them. Usually airlines were three to four months behind in their reports which also made course corrections hard as it would be based on best guess scenarios. With Airline Metrics’ reporting solution all guess work was taken out as every report was tied back to a flight ticket and coupon. The data was updated each week which meant that Ruth could take complete control of discussions in meetings with airlines and provide them with accurate projections on what the spend was well ahead of their own reports and ensure she could meet budgets and not lose any incentives. 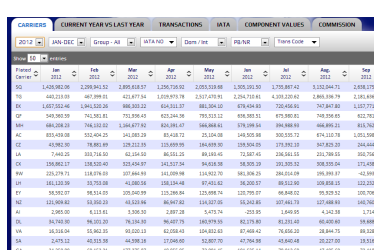 There were surprisingly other benefits once Ruth started looking into more information gleaned from Airline Metrics. She realised that the expense based and financial reports while reporting total spend on an airline “ticket” also included at times taxes paid and more importantly excluded sector values which were part of the journey on that ticket but undertaken on partner airlines. Which meant e.g. a New York – Frankfurt – Singapore return ticket which was flown on United Airlines to Frankfurt and Singapore Airlines to Singapore and vice versa included only 2 sectors of flown revenue on UA. This meant if there was no agreement in place with Singapore Airlines then more than half the value of the ticket was excluded by UA. This was quite a revelation and Ruth was able to then setup a further ten new agreements with foreign carriers where there was a significant amount of revenue based on flown revenue shown on reports from Airline Metrics. These carriers were not listed on any of the reports from either the expense management system nor the financial ones and were also missing from her agents reports. The investment in Airline Metrics was recouped within months and the expense was an insignificant fraction of the total travel spend.